Many states have fully legalized marijuana and several more are expected to. Although for decades critics of marijuana have viewed it as a “gateway drug,” many consider it to be harmless. Even though public perception of marijuana has been that it is not as addictive as drugs like heroin, meth, and other prescription drugs, the effects of marijuana use can still be harmful. People who use this drug, especially on a regular basis, can experience long-term effects of marijuana on the brain and other parts of the body. Users should regard marijuana as they would alcohol; just because these substances are legal, doesn’t mean they do not pose a health risk. The chemicals in marijuana, a.k.a cannabis, can lead to serious negative health effects.

What Do the Chemicals in Cannabis Do?

There are nearly 500 known chemical molecules that are found in ctannabis. Of these, about 70 are only found in the marijuana plant and are known as cannabinoids. The active chemicals in marijuana that are associated with its mind-altering effects are:

THC: THC stands for delta-9-tetrahydrocannabinol. This is the chemical that is chiefly responsible for marijuana’s high. It may help in the treatment of nausea and vomiting associated with various conditions and medical treatments, but it is still under-researched.

Cannabidiol: Cannabidiol shares many properties with THC, but is less psychoactive.

These are the chemicals in marijuana associated with its high and while they continue to be studied for their possible medicinal benefit, they can also have negative long-term effects. Moreover, the other chemicals contained in marijuana have also been under-researched.

Effects of Marijuana on Mental Health According to the National Institute on Drug Abuse, “Several studies have linked marijuana use to increased risk for psychiatric disorders, including psychosis (schizophrenia), depression, anxiety, and substance use disorders.” People who have a genetic predisposition for these disorders are most at risk to develop them with marijuana use. In fact, the Harvard Review has reported that using marijuana as a teen was linked to four times the incidence of depression in young women. Men are also vulnerable to an increased incidence of depression, but more research is needed.

What’s clear is that both men and women are vulnerable to “developing cognitive problems with long-term use.” It’s clear that in the short term, the THC in marijuana can lead to disturbances in cognitive function and working memory. The latest research suggests that marijuana use can also impair cognitive functions like memory for a long period of time– possibly even permanently. Studies have shown that THC affects the hippocampus. This is the area of the brain associated with the formation of memories. Researchers determined that THC interrupts the metabolism of mitochondria in the hippocampus, a process that results in memory loss.

While affecting memory and mood, marijuana use may also pose a serious risk to other cognitive functions. Studies have demonstrated that marijuana use is linked to decreased verbal ability and reductions in general knowledge. What’s important to realize is that these reduced functions didn’t improve after individuals ceased using marijuana, meaning the long-term effects of THC on the brain may be permanent. A person who smokes weed every day or frequently can cause damage to their lungs. Marijuana, like tobacco smoke, is an irritant for the lungs. Smoking marijuana can cause inflammation in the throat and lungs, coughing and increased airway resistance. Because marijuana contains many different volatile chemicals, researchers worry about its risk for causing serious lung conditions like “popcorn lung” and cancer.

Popcorn lung is a rare condition that is associated with damage to the small airways of the lungs. Inhaling marijuana can cause this condition. Popcorn lung can cause shortness of breath, wheezing, coughing, and fatigue. Vaping marijuana puts someone at increased risk for developing popcorn lung.

Researchers are still studying whether marijuana can cause lung cancer. There is some thought that the THC and other cannabinoids could have anti-tumor effects. On the other hand, researchers believe that heavy marijuana use could still be linked to the development of other respiratory cancers. 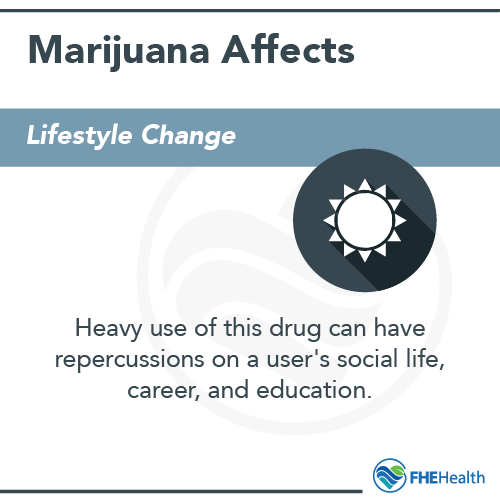 The long-term side effects of marijuana use, especially regular use, can lead to serious lifestyle changes that involve mental and physical health. Heavy use of this drug can have repercussions on a user’s social life, career, and education. Studies confirm that students who engage in marijuana use have poorer grades and test scores than students who do not smoke marijuana. The National Institute on Drug Abuse also states that, “Several studies have also linked heavy marijuana use to lower-income, greater welfare dependence, unemployment, criminal behavior, and lower life satisfaction.”

Cannabis slows cognitive function. That slow down in function can alter cognitive function for the long term. The slow down also affects the body as a whole. Studies have further demonstrated that people who smoke marijuana regularly are at increased risk for workplace accidents and injuries. Marijuana causes long-term emotional effects and other effects on the brain, but it also affects other areas of the body aside from the brain and respiratory system. For example, marijuana can affect heart health. Although significant study is still needed to determine the precise nature of the risks that cannabis poses to cardiovascular health, researchers do know that people who have been diagnosed with heart disease develop chest pain more quickly if they are under stress after smoking marijuana. The chetmicals in marijuana are known to raise resting heart rate and dilate blood vessels. This forces the heart to have to pump harder. Researchers believe that this can increase the risk for heart attack in people already at risk. People who have minimal cardiovascular risk may not face this threat, but more research is needed.

Marijuana may also pose threats to reproductive health. This is one area that researchers are particularly concerned about with the legalization of recreational marijuana use in many states. People of reproductive age who use pot regularly may be damaging their reproductive system. The THC in marijuana disrupts communication between the brain and body. It effectively throws the body’s reproductive functions off-kilter. In women, the effect could be to disrupt ovulation. It can possibly affect sperm counts in men.

Women who smoke marijuana while pregnant can cause damage to their baby’s health. Studies have shown that marijuana use during pregnancy can lead to low birth weight and increased risk for developmental problems in the infant. Women who breastfeed after smoking marijuana may pass THC to their infant.

People who smoke marijuana should note that long-term health effects could be joined by others as researchers increase their study of marijuana use. In addition, there is still the old concern that marijuana is a gateway drug. People rely on marijuana’s high may seek out drugs that offer a more powerful effect. Marijuana use can also pave the road to substance addiction. The legalization of this drug does not minimize its potential for harm. Anyone who is concerned about their marijuana use should seek an evaluation at a high-quality addiction treatment center such as FHE Health.