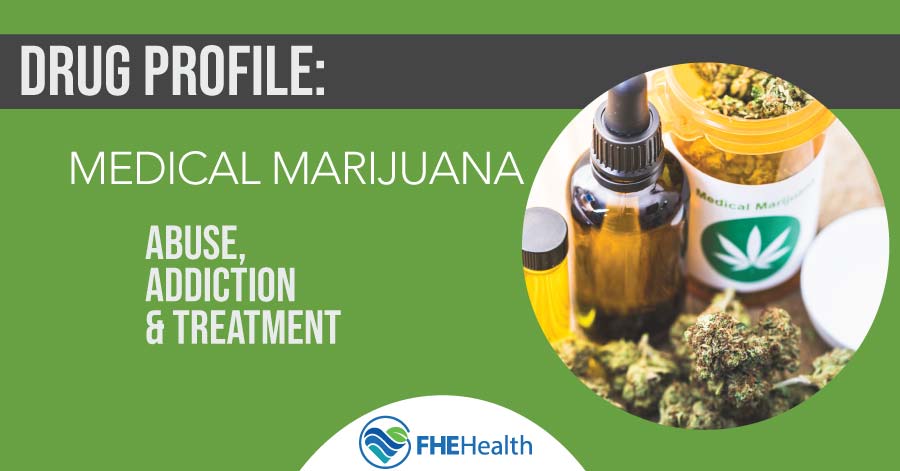 More than 37 million people report using marijuana in the United States, according to the Centers for Disease Control (CDC), making it the most commonly used illegal drug in the US (and the world). As even more perspective— roughly half of the American population (51%) has used marijuana at least once in their lifetime.

In recent years, with ten U.S. states, including Colorado and Oregon, having legalized recreational marijuana use—and it’s likely that more states will follow suit—marijuana has never been in the news as much as it has lately.

But marijuana is also increasingly being used to treat certain medical conditions— and with some success. In fact, a growing number of U.S. states have now legalized the drug’s use for specific health reasons.

This article will educate readers on medical marijuana, including how it’s being used, why it’s prescribed, what symptoms it can treat, the side effects of the drug, and the potential addiction dangers it poses to some users— especially those who use it outside of a prescription. Marijuana is a greenish-gray mixture of the flowers and leaves from the “cannabis sativa” plant, which is noted for its tall stalk and its distinct, five spiked leaves. Marijuana users often smoke it by rolling it into a cigarette or a cigar (blunt), by inhaling it in a bong or by inhaling the vapor in a vaping device. “Edibles” (food items consisting of marijuana that you ingest) are also becoming increasingly popular in states where recreational marijuana is legal.

Medical marijuana is a synthetic version of this drug that also goes by the generic name “marinol” or the brand name “Dronabinol.” It is prescribed to patients who have nausea associated with cancer chemotherapy treatments, those with some types of chronic pain and those who are struggling with low body weight, such as those with anorexia or AIDS. A growing number of U.S. states now permit marijuana prescriptions for specified conditions.

Side Effects of Medical Marijuana

One very common side effect of marijuana is that it can increase a person’s appetite. Users often report “getting the munchies” or craving snack foods after smoking marijuana. Less desirable effects of marijuana use include red eyes, an elevated heart rate and short-term memory loss.

Packaging for marinol (medical marijuana) lists these other side effects:

Traces of marijuana and its metabolites can be detected in a person’s system for much longer than most drugs, normally 30 days or longer. 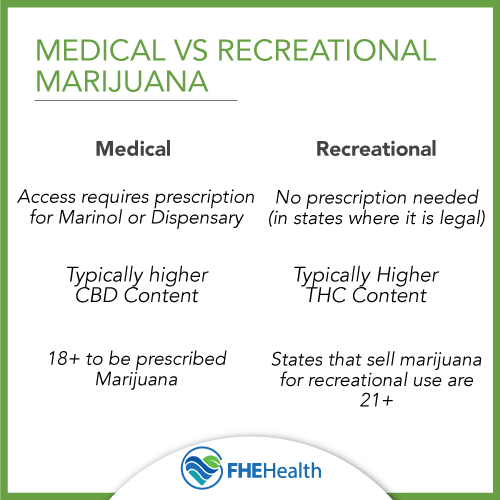 People who abuse their marijuana prescription, not taking it as directed, may experience what a marijuana “high” feels like. That euphoric high is from the psychoactive compound tetrahydrocannabinol (THC), one of more than 400 compounds found in the “cannabis sativa” plant. The effect can be felt within minutes of ingestion, and the “high” generally lasts between two and six hours. The experience can differ between individuals, but users have reported:

The Addiction Dangers of Medical Marijuana Substance abuse can take several forms with marijuana. Like any other controlled substance, including alcohol, marijuana should be considered a problem if it interferes with a person’s work, family life and other responsibilities. According to the CDC, approximately one in ten marijuana users will become addicted.

Whether marijuana has addictive properties is subject to some debate. However, chronic users may experience irritation, cloudy thinking, irritability, anger and cravings when they stop using the drug.

Classic symptoms of marijuana addiction include having trouble concentrating, memory problems and the need to continually seek and smoke more and more marijuana to achieve the same high.

Dangers of marijuana abuse include depression, isolation and loss of job or family relationships. Chronic marijuana users often develop high levels of anxiety and paranoia. It has long been held that marijuana can act as a “gateway” drug and lead users to gradually try more addictive drugs like cocaine, opioids and heroin. (That tenet, however, is widely debated.)

There is also a suspected link between long-term marijuana use and psychosis, especially in those people with a genetic predisposition to this condition.

Marijuana use by pregnant women has been shown to affect the cognitive and learning abilities of their babies as well as the birth weight.

Help and Hope for Marijuana Addiction

The good news for those with a marijuana use disorder is that treatment can provide a path to recovery. Most programs include residential treatment that allows patients to safely detox from the drug while under the care of experienced medical professionals. During their residence, patients can also receive group and individual therapies that help them address the behavioral roots of their addiction to marijuana, such as:

According to the National Institute for Health, the average person seeking help for marijuana addiction has used the drug daily for more than 10 years, and has tried to quit an average of six times without success. But, professional treatment can break this deflating cycle of addiction. If you or someone you love has a marijuana problem, don’t be afraid to reach out for help. Contact FHE Health today. Our compassionate team of recovery counselors is standing by to take your call any time of day or night.