Actress Margot Kidder suffered from mental health problems throughout her short life, specifically bipolar disorder, which doctors failed to diagnose until she was in her early 40s. When she was 14, Kidder tried to commit suicide by overdosing on codeine capsules following a sudden break-up with her boyfriend.

She acted in school plays, and Kidder says acting gave her a chance to “let her real self out” because “no one would ever know it was the true me.” After graduating high school, Kidder attended a university in British Columbia but dropped out before completing one year. She also became pregnant and had an abortion while at university. 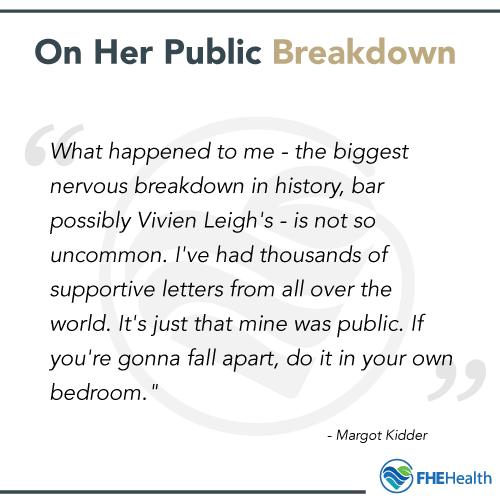 During the 1970s, Kidder made over a dozen movies, including the box-office hit “Superman” (1978), the movie that catapulted her to stardom. In 1975, she met writer Thomas McGuane and gave birth to a daughter.

She married McGuane but divorced him just a couple of years later. Kidder later said she had severe self-esteem issues while married to McGuane and experienced difficulty trying to maintain her film career due to her burgeoning personal and mental health issues.

Kidder’s bipolar disorder (referred to as manic depression in the 1970s) would spiral into an extended manic phase in which she thought McGuane, working in cahoots with the CIA, wanted to kill her. She told friends that they wanted her dead because they thought the book she was writing at that time was so powerful it posed a danger to the world.

People in the manic stage of bipolar disorder may not remember or be aware of doing things that disrupt their life or the lives of others. They may steal from others, gamble away large sums of money, buy expensive items they can’t afford or get married after knowing someone only a few days. Unfortunately, bipolar mania (or depression) may last for as long as three months, enough time for the person to seriously disrupt their lives. In the 90s Kidder faced a serious of personal and professional catastrophes including injuries in car crashes and financial difficulty. While writing her autobiography in Los Angeles in 1996, Kidder entered a manic phase that resulted in a highly publicized nervous breakdown. Kidder remembers she was working on her book when a virus infected her computer, causing it to crash and delete nearly three years of writing.

While manic and delusional, Margot Kidder went missing for four days and lived on the streets of Los Angeles. When a man tried to rape her, she fought back and her teeth caps were knocked out (other reports state she had some teeth removed to mislead her dental records). Police found her living in a box behind some bushes, completely disheveled, bruised and with her hair cut off with a razor. While convalescing in a psychiatric hospital, Kidder came to ultimately accept her diagnosis of bipolar disorder (she credits the writing of author Kay Redfield Jamison) and began taking lithium.

Lithium, an anti-manic agent prescribed primarily to treat bipolar and schizoaffective disorders, decreases norepinephrine levels in the brain while increasing serotonin. Although doctors aren’t sure exactly how lithium works to stabilize mood disorders, it helps to significantly reduce, or even eliminate, the intense cycling between mania and depression.

Doctors may also prescribe a mood stabilizer called Depakote in conjunction with lithium or alone. If lithium and Depakote fail to stop the cycling, newer, antiepileptic drugs are available that may address symptoms of depression and mania better.

Working Again in Movies and On Broadway Since her crisis, she steadily worked in theatre and film again, making sure she spent enough time on her life rather than just work. She dedicated much of her time to political activism and was no stranger to making hyperbolic statements about leaders. Margot Kidder appeared in films and off-Broadway shows between 2000 and 2015. She was awarded an Emmy for her performance in a children’s show called “R.L. Stine’s The Haunting Hour.”  In addition, she no longer had bipolar disorder cycles and was talking openly about her breakdown to various magazines and reporters. Some of her statements were less than ordinary regarding mental health, including “stopping seeing [psychiatrists] was my first step to getting well, she would later be appointed as a spokesperson for an advocacy group that believes in the treatment of mental health without the reliance on medication.

Friends found 69-year-old Margot Kidder dead after not hearing from her for a few days. A coroner ruled her death a suicide, caused by a self-inflicted overdose of alcohol and drugs.

In the years leading up to 2018, Kidder had been actively protesting at Standing Rock, standing outside in freezing temperatures. Her health started declining when she began protesting, which may have contributed to her suicide.

Joan Kesich, a close friend of Kidder’s, was the person who found Kidder deceased. Kesich told the media, “Kidder was fearless, always speaking the truth regardless of the consequences.”

Kesich also said that during Kidder’s final months, “Margo was just herself — same kind of energy and love. But I want everyone to know this about her because she was really glorious, a blazing energy.”

Margot Kidder’s daughter, Maggie McGuane, told the Associated Press she knew what had happened to her mother the moment she received a phone call from the coroner. McGuane later said that it was “a big relief to know that the truth is out there.”

While we may be tempted to view Margot Kidder’s life as succumbing to mental illness, she accepted her diagnosis and for that, was able to live many healthy years. Mental health and addiction, like any other disease, will often involve a relapse. It is the nature of the condition the person is living with. By openly discussing the struggles many of us deal with, we can break down the stigma and realize we are not alone.

Anyone dealing with a serious mental illness such as bipolar disorder, schizophrenia or major depression is vulnerable to developing suicidal thoughts (suicide ideation). Being correctly diagnosed as early as possible means people can start benefiting from treatment provided by mental health therapists and counselors.