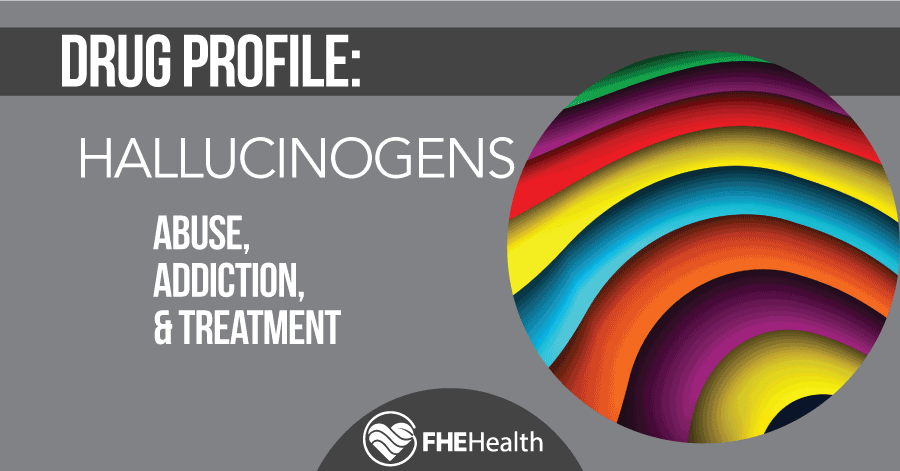 Hallucinogens are a class of drugs that causes hallucinations due to the presence of psychoactive agents. These drugs are highly addictive and dangerous. One of the most common is LSD, though there are numerous hallucinogenic examples to consider.

These drugs have played an active role in today’s culture, allowing people to break away from the stress of life and enter an altered state of being. (Jimi Hendrix is perhaps one of the most notable celebrities known to have used the drug LSD.)

Though a more popular option during the 1960s, hallucinogens still enjoy relatively high rates of use. The 2013 National Survey on Drug Use and Health found 229,000 Americans over the age of 12 reported using LSD in the previous month, as noted by the National Institute on Drug Abuse. PCP use is also not uncommon, with 33,000 people reportedly using PCP in the previous month. The agency reports that the use of dissociative drugs like this is low compared to other types of illicit drugs— but that fact doesn’t negate the dangers of these drugs. There are numerous types of hallucinogens. Drugs like this alter perception, feelings and thought patterns. They can make people see images that are not present or create sensations that are not real. The drugs themselves can be found in some types of plants and their extracts. Hallucinogenic mushroom, for example, is a commonly used product and has been for religious rituals for centuries, according to the National Institute on Drug Abuse.

The most common hallucinogens include the following:

“D-lysergic acid diethylamide,” or “LSD,” is a powerful drug that creates changes in a person’s mood. This drug generally appears as an odorless, clear or white material. The drug is derived from lysergic acid, which develops on rye and other grains as a fungus. It’s sometimes called “dots,” “yellow sunshine,” “acid,” and “blotter.”

“Phencyclidine,” or “PCP,” was first created as a type of general anesthetic for surgical needs in the 1950s. Due to the serious side effects it creates, doctors no longer use it, but it continues to be used in illicit forms. Often found in liquid, capsule or tablet form, it can be hard to instantly recognize. In some cases, a white crystal powder is used. PCP is sometimes called “peace pill,” “angel dust,” “love boat,” and “hug.”

Derived from a plant found in southern Mexico and South America, “salvia divinorum” (often referred to as just “salvia”) is another hallucinogen. It’s usually sold in a powder form illicitly or as leaves. Other names for it include “diviner’s sage,” “magic mint,” and “maria pastora.”

“Dimethyltryptamine,” or “DMT,” comes from plants found in the Amazon rain forest. This is a highly powerful chemical that can cause overdose upon first use in some people. The drug is generally purchased illicitly as a white crystal powder, and is sometimes referred to on the street as “Dimitri.”

This is a form of tea that contains DMT in it, which makes it a mind-altering drink. It’s sold in the form of tea (as dried leaves), and is sometimes called “aya,” “hoasca” and “yage.”

“Peyote,” sometimes called “mescaline,” is another plant-derived hallucinogen. In most cases, it comes from a spineless cactus, but can be synthetically produced as well. Its street names include “cactus,” “buttons” and “mesc.”

Ketamine is a type of anesthetic used in surgical procedures on both people and animals. The drug is found on the streets in a powder or tablet form, though it is commonly used by vet offices in an injectable liquid. It’s sometimes called “special K,” “K,” or “cat valium.”

“Dextromethorphan,” or DXM, is a type of hallucinogen that creates an out-of-body sensation. It is found in some types of over-the-counter cough and cold medications. It can be purchased in various forms including capsules, syrup or tablets. It’s sometimes referred to as “robo.”

How Do Hallucinogens Impact People? Hallucinogens are consumed in a variety of ways: they can be ingested in pill form, brewed as tea, injected and inhaled. Once the substance reaches the brain, it disrupts the brain’s delicate network of neural pathways, thereby altering the way the brain communicates with the rest of the nervous system. The result is a dramatic change in one’s mind-body perception of what’s real.

Hallucinogens can also change a person’s mood, body temperature, hunger level, sleep, muscle control, sexual function and sensory perception. Some forms interact with the chemical glutamate found in the brain. In this way, they can change a person’s perception of pain, response to the environment, emotional stability and ability to learn.

Hallucinogens can remain in the system for eight to 10 hours or longer. Some forms, such as tea, may only have an impact for a few hours.

Hallucinogens incorporate a variety of substances, some of which can create a chemical dependency and withdrawal symptoms upon cessation of use. Virtually any demographic can suffer from the behavioral addiction of hallucinogen use. Tolerance to hallucinogens also occur quickly. The signs of someone addicted to hallucinogen usage include:

Signs of Short-Term Use and Effects of Hallucinogens

The short-term effects of hallucinogens may seem mild and quickly over. However, these “trips” can often be followed by unpleasant experiences and physical pain afterward. Effects can include:

Signs of Long-Term Use and Effects of Hallucinogen The long-term effects of hallucinogen use can also be physical and psychological. In some cases, such as the use of ketamine, people develop painful ulcers in their bladders and poor memory. Kidney problems are common with many hallucinogens as well. Effects include:

Persistent psychosis can also develop. In some people, visual disturbances, paranoia and disturbed mood can remain present long-term. Some people also develop flashbacks. In these instances, without warning or use of any drugs, a person can feel as though they are high or hallucinating. This can lead to sleep disturbances and even a mental health disorder.

The use of hallucinogens even one time can lead to:

Because the use of hallucinogens can be addictive and highly risky to consume, those abusing them should seek out medical care for treatment and both short-term and long-term rehabilitation. A hallucinogenic drug test may provide some insight into what a patient is taking. From there, a hallucinogen rehab like FHE Health can provide supportive treatment to help patients to resolve their reasons for reliance on mind-altering substances.

There are no medications approved to treat those with an addiction to hallucinogens. There is no medication that can reverse the impacts of these drugs during an overdose. However, behavioral treatments can help patients regain control over their life.

Treatment for this type of drug abuse may include intensive outpatient therapy in some cases, though residential rehab and mental health stabilization may be necessary in some situations. Many patients benefit from a 12-step program along with cognitive behavioral therapy.

For those who are facing debilitating hallucinogen use, treatment is available at FHE Health. Contact our admissions team for a no-obligation, private consultation about treatment options available to you.