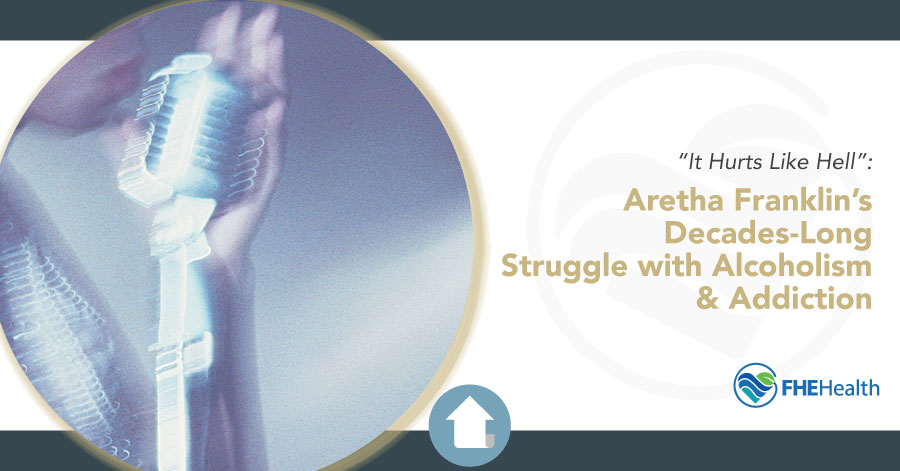 A Grammy award-winning artist and a woman who recorded singles so iconic that they live on in today’s music, half a century after the first recording, Aretha Franklin stole the charts with hits like “Respect,” “A Natural Woman,” “Chain of Fools” and “I Never Loved a Man (The Way I Love You).” 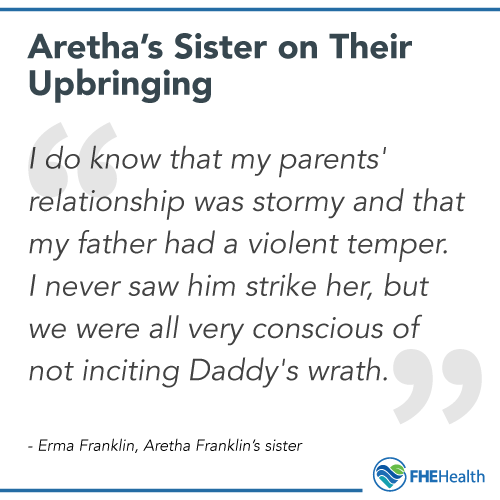 While Aretha’s struggles with alcoholism aren’t publicly available and she often denied any issues, the struggles of her family life are well documented. Her father, noted preacher Clarence LaVaughn Franklin, gained fame for his incredible oratory style, a deep devotion to God, active participation in the Civil Rights movement and an unfortunate number of affairs through the years.

His temper and dependence on alcohol were also a part of the package, and Aretha and her three siblings were cautious when handling their father. Erma, Aretha’s oldest sister, commented, “I do know that my parents’ relationship was stormy and that my father had a violent temper. I never saw him strike her, but we were all very conscious of not inciting Daddy’s wrath.”

That temper and rumors of cheating on his wife led to the dissolution of his relationship, and Aretha lost close contact with her mother after the divorce. While spending summers with her stepfamily was a high point, she spent most of her time honing her musical skill under the stern, watchful eye of her father.

That watchful eye was noticeably in abeyance when Aretha gave birth to her first child at age 12 and her second at 14. In her words, “[He] was not judgmental, narrow or scolding,” she wrote. “In my fifth or sixth month, I dropped out of school. My family supported me in every way.” Given his own history with a 12-year-old parishioner in Memphis that resulted in a child, perhaps C.L. Franklin was not surprised or shocked by his daughter’s pregnancy.

In what would become a lifetime of silence and an unwillingness to answer questions about her private life, Aretha failed to discuss the fathers of either of her first two children.

Aretha’s fame was a family focus, and her father started showing off her skills to recording artists early and often. The pressure to be great and the ups and downs of dealing with her father likely impacted many of her later decisions. While her father was the driving force behind her first gospel album, “Songs of Faith,” it wasn’t until she recorded her first Atlantic Records album that she started demolishing the charts.

Unfortunately, Aretha left a troubled home life for an even more troubled marriage to Ted White, the man who became her new manager. Several years in a relationship marked by physical abuse eventually led to the recording that would propel Aretha to the top of the charts: “I Never Loved a Man (The Way I Love You).” The lyrics illustrate the pain and heartbreak of an abusive relationship with lines like:

You’re no good, heartbreaker
You’re a liar and you’re a cheat
And I don’t know why I let you do these things to me

Later in the song she goes on to sing:

The way that you treat me is a shame,
How could you hurt me so bad?

Even when asking the question, she also frames the answer with the repeating line: Her struggles with alcohol likely began during her marriage, with one notable incident resulting in a fall on stage. Rolling Stone reported, “At a show in Columbus, Georgia, in May 1967, Franklin fell off the stage and broke her arm. She later claimed she’d been blinded by stage lights, but Bowen had been told it was caused by alcohol.” Ruth Bowen was her publicist at the time and said, “She’d been using booze to numb the pain of her lousy marriage.”

According to DrugAbuse.gov, alcohol abuse is substantially more likely for women who have been sexually abused during childhood. When your support network is part of the problem and perpetuates a cycle of abuse, it can create codependency and spiraling depression. Depression can be a major factor, with one study reporting that 63.8% of alcohol-dependent participants also struggled with depression.

While The Queen of Soul never willingly spoke about her abuse or her alcohol troubles, reports from friends, family and coworkers paint a clear picture.

Denial as a Strategy

For many people facing addiction, denial is the first and instinctual response. In fact, Psychology Today reports, “The psychodynamic perspective suggests that denial is basically a defense mechanism … That is, individuals with substance disorders use denial in order to prevent threatening emotions entering our conscious thought. Lacking the capability to cope with negative states, they will erect powerful, sometimes intransigent, defenses in a desperate effort to avoid feeling them.”

It is impossible to know the depth and scope of Aretha’s alcoholism and whether her refusal to discuss it stems from denial or merely a desire to avoid negative publicity. She was equally close-mouthed about her abusive marriage and her father’s temperament. The desire to hide family trauma is not uncommon, particularly for those in the public eye.

Starting an Honest Conversation With Respect

While Aretha Franklin had a right to keep her family history of abuse and possible substance use private, celebrities are often the people we look to for guidance. When stars share their struggles and the strategies they use to overcome alcoholism or drug addiction, it can be a guiding light for others in similar situations.

Aretha Franklin may have felt a stigma attached to abuse and alcoholism, but it is with honest understanding that we destigmatize these issues and bring more treatment options into the public consciousness.

Alcoholism is a disease. It can happen to anyone. According to the National Institute on Alcohol Abuse and Alcoholism, 26.45% of adults report engaging in binge drinking on a monthly basis. With alcohol use so prevalent in society and the risks of addiction so high, learning about treatment and sobriety is a must.

At FHE Health, we offer a variety of programs to help you reach sobriety. Give us a call today at (833) 596-3502 and make an appointment at our intensive inpatient treatment or outpatient detox center in South Florida. We are dedicated to helping you reclaim your life, build lasting relationships and reconnect with sober living.