Born March 20, 1978, Chester Bennington was the frontman for the popular band Linkin Park. He was also the lead singer for Dead by Sunrise and the Stone Temple Pilots replacing Scott Weiland in 2013. Bennington and Linkin Park sold more than 100 million records worldwide, making them one of the best-selling bands of the 21st century. Some of the songs he’s best noted for include Crawling, Numb, Breaking the Habit and Burn It Down. Chester Bennington had a history of drug abuse and alcohol addiction. At age 11 he began using cocaine, smoking marijuana and using meth. He attributed his actions to coping with on-going sexual abuse which started when he was just 7 years old by an older male friend. The abuse continued until he was 13 years old. He was afraid to tell people what was going on because he didn’t want to be judged. He eventually did reveal the perpetrator to his father but chose not to seek retribution because the accused had been sexually abused as a child himself.

Throughout high school, he used cocaine, meth, LSD, opium, and marijuana while being bullied. In a 2016 interview with Kerrang Bennington said “I was on 11 hits of acid a day. I dropped so much acid I’m surprised I can still speak! […] I used pot to get off drugs. Every time I’d get a craving I’d smoke my pot.” Bennington’s mother refused to let him live in the house when he was 17 due to his prior drug use.

Chester joined Linkin Park three years after their formation in 1999 and the band quickly found success with their album Hybrid Theory. Throughout this period he appears to have used at least some drugs culminating in his admittance to a rehab in 2006 after the end of his first marriage. In 2009 he told Kerrang that ‘I felt like my life’s work had been given away. I drank myself to the point where I couldn’t leave the house and I couldn’t function, […] I wanted to kill myself. I could very easily not be the person who’s sitting here right now. I could be dead. It was a horrible, horrible existence.” In a separate interview, he said “in 2006 I had a choice between stopping drinking or dying”. He explains how he discussed it with the band and learned how they really felt. He realized how it was affecting everyone else. They told him”[you were] two people – Chester and then that f***ing guy. I didn’t want to be that guy.” He was honored in 2013 with the Stevie Ray Vaughan Award by the Musicians Assistance Program for his work in supporting sobriety and helping other musicians who need treatment.

On the promotion of his last album with Linkin Park, One More Light, Chester talked about how difficult 2015 was for him, saying ‘2016 was better but there was a lot of anger and resentment on my end I had to work through.’ Also saying that ‘I’m coming from a real place. I’ve been active in s***, in my disease, thinking I’m hiding it from everybody as opposed to being honest.” But at the end of the record-making process, appears to have come out much stronger saying: “The person I am today at the end of making this record and I the person I was at the start of making it are two totally different people. I have such a lust for life now, such a positive outlook.”

On July 12, 2017, two months after the release of Linkin Park’s latest album, Chester Bennington was found dead by his housekeeper in his home in Palos Verdes Estates, California. His death was ruled suicide by hanging. At the scene, the medical examiner confirmed there was a half-empty bottle of alcohol, but no drugs were present.

What Chester Said About His Mental Health Throughout his battle with addiction, Bennington was candid about his mental health issues. In 2015, he described to Rock Sound, “I literally hated life, and I was like, ‘I don’t want to have feelings. I want to be a sociopath. I don’t want to do anything. I don’t want to care what other people feel like. I want to feel nothing.’”

He used his mental health and addiction as inspiration for the songs he created. In a 2009 interview with Noisecreep, he stated the song Crawling was penned from a feeling of lack of control over himself when he used drugs and alcohol. He also worked hard to maintain his sobriety, stating, “It’s not cool to go drink and be a dumbass. It’s cool to be a part of recovery. This is just who I am; this is what I write about, what I do, and most of my work has been a reflection of what I’ve been going through in one way or another.”

Bennington’s friends recognized his struggle. In Rolling Stone Magazine, former bandmate Mike Shinoda described Bennington as “…a fun-loving dude, but he was also complicated.” After Bennington’s death, Shinoda posted an open letter to Bennington on the singer’s website. He said, “We’re trying to remind ourselves that the demons who took you away from us were always part of the deal. After all, it was the way you sang about those demons that made everyone fall in love with you in the first place.”

The sad truth is that alcohol and drug abuse frequently go hand-in-hand with depression. The need to numb oneself from the pain leads to self-medicating. This creates a vicious cycle and one where the individual requires treatment for two different conditions. Even with expert treatment, it is a life-long struggle many people deal with to cope with mental health issues and recovery.

According to the American Psychiatric Association, 50%of all mental illness starts by the age of 14 and 75% by the age of 24. There are many warning signs to look for that can indicate an individual needs professional help, including:

With Bennington, he recognized the signs himself, and was brave enough to discuss them publicly and show other they are not alone. While displaying one or two of the classic symptoms doesn’t necessarily mean someone is suffering from a mental health issue or depression, it can be a major warning sign. 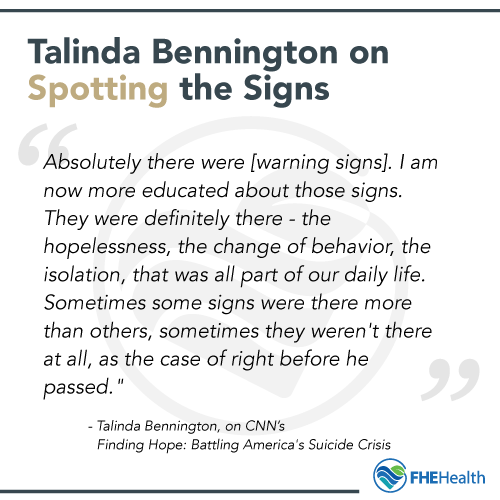 Two months prior to Bennington’s death, his close friend and lead singer of Soundgarden, Chris Cornell, was found dead by hanging in his room after the band gave a concert at the Fox Theater in Detroit. In spite of losing his friend, Bennington had written six new songs for the band’s upcoming album. While we all are likely to experience grief, it can easily cause episodes of depression for those who have a history of the disorder.

Feelings of overall sadness affect nearly everyone at some point in life, but depression interferes with normal functioning and daily life. According to the Centers for Diseases Control, 20% to 26% of women and 8% to 12% of men experience some type of clinical depression at some point in their lives. While depression is a serious disorder, it is treatable if you learn to recognize the signs and symptoms of the disease. Companionship and support are vital to a loved one’s recovery.

On the day of his death, Bennington was 41 years old and left behind six children. Because he made such a big impact in the world of music, many artists had things to say about his death. Long-time bandmate Mike Shinoda posted an open letter on the bands’ website and was “shocked and heartbroken.” Chance the Rapper called the untimely death a “tragic ending,” while Jimmy Kimmel stated, “Chester was one of the kindest men I’ve had on my show. My heart breaks for his family and friends.”

In response to Chester’s death, Talinda Bennington launched a new mental health campaign to encourage people to help those who are suffering. The Campaign to Change Direction focuses on what we think and how we respond to mental health. The organization provides resources for both families and individuals who need help in coping with mental illness.

As stated on Linkinpark’s page dedicated to Chester:

In case you or someone you know needs support, here are some resources:
Suicide Prevention Lifeline 1-800-273-TALK
Crisis Text Line, the free, nationwide, 24/7 text message service for people in crisis, is here to support. For support in the United States, text HELLO to 741741 or message at facebook.com/CrisisTextLine.
For support outside the US, find resources at http://www.suicide.org/international-suicide-hotlines.html

FHE Health is a treatment center for mental health and substance abuse, not an emergency service. If there is an immediate danger, please contact proper authorities.