Home > Remote Resources > 12-Step Lingo & Types of Meetings: How to Find Your Way in the World of Recovery Imagine you just finished an inpatient recovery program. You’re transitioning to outpatient care, and you start to feel like yourself again. You’re excited to get back to your life, but at the same time, you realize recovery is a lifelong battle, and on your own, it will be anything but easy.

So you find a recovery group that works for you. Maybe it’s Alcoholics Anonymous (AA), Narcotics Anonymous (NA) or some other 12-step group.

It’s likely that you’ll walk into your first meeting feeling positive about your chances to fit right in. At first, however, your experience may be different than what you expected.

In this piece, we’re going to talk about group meetings: the different types, the common AA lingo used within and why the terminology used in 12-step meetings shouldn’t be a barrier to you seeking community.

If you’re in recovery for addiction of any kind, the good news is that there’s probably a 12-step group for you. Some chemical dependency groups are widely publicized, such as AA, NA or CA. Lesser known are the recovery support groups for families of addicts: Al-Anon and Nar-Anon, along with adolescent-focused groups Alateen and Narateen.

There are also 12-step programs for behavioral addictions:

In addition, there are many broad-spectrum and regional 12-step groups depending on where you are and what you need, making these groups accessible across race, class, and socioeconomic lines.

Your first steps into these meetings, however, can be intimidating. Not because you won’t be immediately welcomed — the vast majority of the people you’ll meet in recovery groups are welcoming and compassionate. On the contrary, the learning curve in these groups comes from the terminology and culture.

There are a few different categories of recovery jargon you’ll need to understand to feel like an initiated member of a 12-step group: terms relating to groups, terms relating to “the program” and “recovery lifestyles” terminology.

Getting Into a Group: What Is a Closed AA Meeting? Go onto the website of the group you’re looking for, and you’ll likely see something that looks like this. You’ll be confronted with a choice. Do you want to attend a closed meeting, an open meeting, or less common, a blended meeting? It may be frustrating to find out that there are narrow terms to know before you even get to your first meeting.

Here’s what they mean:

It should be noted that even when you read that a certain group meeting is closed, it doesn’t mean that you can’t walk in or that you have to be invited.

Chairperson / Chairing an AA meeting: In all formal versions of an AA meeting there is a chair or ‘lead’ for the meeting. This helps welcome the newcomer as well as control the meeting so that it is beneficial to all members.

One of the best parts of AA, NA and other 12-step groups is that they aren’t exclusive to different varieties of addicts. If you’re in recovery, there’s a place for you in one of these many communities.

The Program: How to Talk About AA as a Whole

The next series of words you’ll need to familiarize yourself with to succeed in a group like AA are those terms used to describe the program. These explanations are courtesy of AA.org: Meeting after the Meeting: Most 12-step groups have a ritual, where the members congregate outside the meeting space for a casual chat and smoke;  many recovering addicts take up smoking as the lesser of two evils. This gives group members the chance to debrief with some lighter talk before returning to life outside the Program.

Recovery Jargon: Talking About the Lifestyle 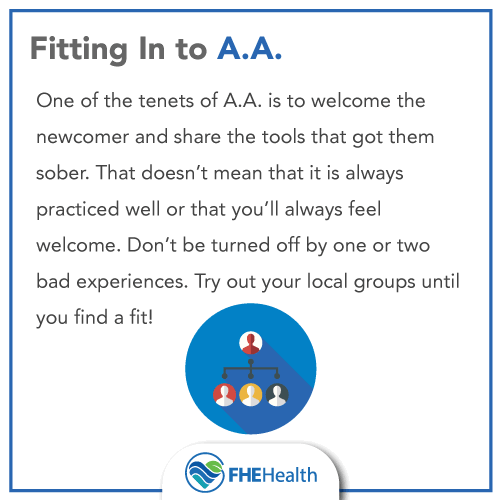 Once you’ve gotten up to speed on how to talk about AA and 12-step meetings at a high level, you’ll need to learn how to interpret the things people say in the meetings. Usually, a 12-step meeting consists of the group listening to a series of individuals talk about their progress or their past.

Depending how much time each person has spent in the group, their command of AA lingo will vary. Here are some terms you should expect to hear:

The Importance of Learning AA Lingo

If you’re planning on becoming a part of a 12-step community, learning the language is the first step. While it may seem intimidating at first, it will get easier. The members of 12-step groups are happy to explain some of the terms and phrases that define them.